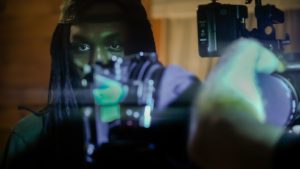 Within film instruction, there are times of doubt…and the easiest thing to do is give up…but don’t!  When your ideas are realized, the possibilities are predictable and endless!

We are pleased to announce that CCSU Film Graduate, Rashad Frett is a selected recipient of Spike Lee’s Production Fund.   Frett, who graduated from CCSU’s Film program in 2009, has since been accepted to NYU’s prestigious MFA program in Film at Tisch School of the Arts.  His work has been seen in national and international film festivals.

We are extraordinarily proud of Rashad and all others who continue to pursue their passions, advance skills and tenaciously tell meaningful stories.   Never give up!