The heart of CCSU FILM’s achievement has always centered around the original ideas of our students    While some ideas are controversial, others can be light-hearted and comedic.  But more than dreaming ideas,  our students regularly exercise, cast, explore, costume and rigorously develop the necessary skills to produce their ideas.  The process is by no means easy….But it can be absolutely transformative.

We are pleased to announce CCSU Film student’s, Ryan Sehmi and Michaela Salvo are an Official Selection at the Women’s Film Festival in Philadelphia.

In his own words, CCSU Film student, Ryan Sehmi describes the process of creating this compelling piece below:

“Every 92 seconds, another American is assaulted. One of these American’s is Michaela Salvo.  This issue is disgusting and a majority of assaulters, including hers, get away with it. 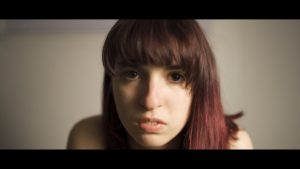 The story of making a film on this subject originated by Michaela’s struggle to create photographs based on her assault.  As an artist, she wanted create images in ways that communicated her life and mental health following her assault… but she was struggling.

While I was taking a film class at CCSU, I began working on this film, but the film we created was far different than when we first started.  Beginning with a shot of my subject curled into a ball, the first draft was terribly lit in our bathroom.  I look back at it in embarrassment when comparing it to what we have now.   The process to get there included exploring and creating about 10 different versions of this film,  but it allowed Michaela and I to find her truthful story.

We showed drafts to our professor who appreciated the intent, and encouraged us to earn the “healing event” that we wanted.  So we we went to the drawing board and continued.

Whenever we talk about assault, which is too infrequently, we talk about how the person is a victim… but that is all we talk about. We don’t focus on that person as a human, what their passions are, who they are. We see a shell of a person and that is wrong.  We need to look at these humans as survivors.

We decided the visual of this film would show how a person who has been assaulted copes with their experience. For my girlfriend, it was creating self-portraits.  Therefore, we decided to create a film of her preparing for one of these photoshoots… even using her some of the imagery she had created. 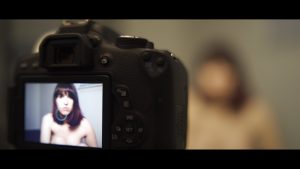 This approach seemed more effective and our professor agreed. Each week of the semester, he encouraged and guided us through the rest of the project.  Many classes, I would present a new shoot and edit of the project, which brought us painfully and slowly closer to our current film.

Finally, on April 23rd 2019, it was completed.   This process opened me up to the world of using cinema as a tool for combatting social issues. If not for my love for my girlfriend and her collaborating with me to create something that could help along with the one-on-one advising from our professor, this film would have never been made and I wouldn’t be on the path of using art in this way.

92 SECONDS will be featured at the WOMEN’S FILM FESTIVAL in Philadelphia this March.