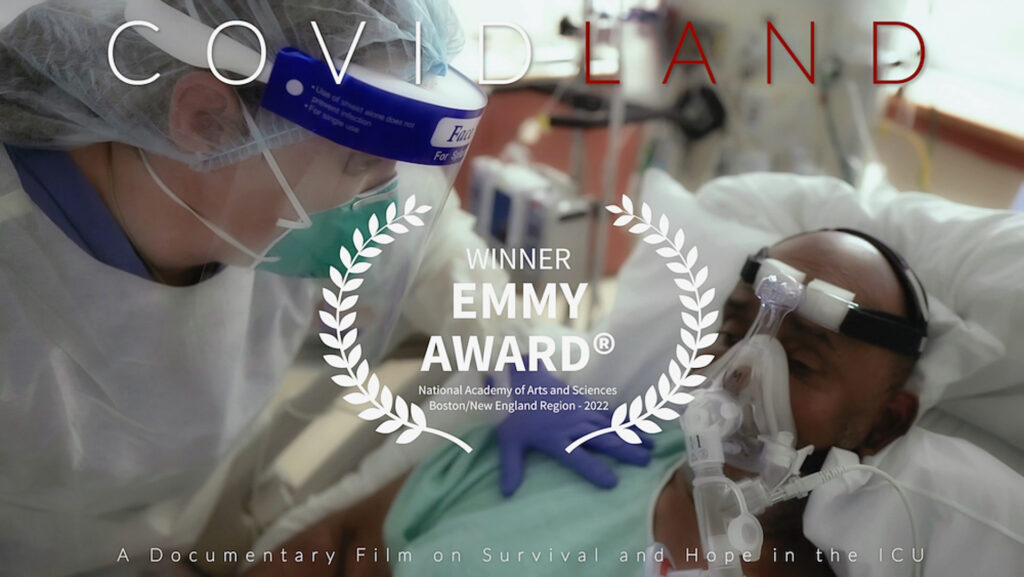 CONNECTICUT  (June 6, 2022)
Jeffrey Teitler, Hartford HealthCare and Medscape earn an Emmy® Award from the National Academy of Arts and Sciences, (NATAS) Boston/New England Region during the 45th Annual Emmy® Celebration.
Recognized for outstanding achievement in the Short-Form, Societal Concerns category, COVIDLAND, a documentary film was produced by Jeff Teitler, Rebecca Stewart, Nick Dethlefsen and Eugenia Yun.
During the height of the pandemic, critical care physician, Megan Panico and her ICU team at Hartford Hospital selflessly cared for on onslaught of Connecticut’s most critical COVID-19 patients.  Sacrificing their own health and family needs, COVIDLAND is an intimate portrait of courage and hope during the greatest healthcare crisis of our time.
EMMY Ⓡ AWARD FOR COVIDLAND – National Academy of Arts and Sciences – Boston / New England Region
COVIDLAND was published by Medscape in January of 21.  Soon after, the documentary was endorsed by WEBMD‘s Chief Medical Officer, Dr. John Whyte.  COVIDLAND also won an Eddie and Ozzie Award from Folio Magazine as well as a Digital Health Award from the Health Information Resource Center.

We are so honored to preserve these important times, share such rarely-seen events and highlight the character, courage, skill and care, that occurs within Connecticut’s frontlines every day.

Produced in collaboration with Tina Verona, Rebecca Stewart and Nick Dethlefsen along with Hartford HealthCare’s Emergency Department, after 17 days clinging to life on a ventilator, hospital security guard, Jay Bialkowski’s recovery from COVID-19 was nothing short of miraculous.   It was also just the beginning of a brutal journey back to his life.

Thanks to the many medical practitioners and patients, who allowed their events, lives and care to be captured.     We would also like to thank the National Academy of Arts and Sciences – Boston/New England Regional Chapter for the prestigious Emmy® Award and Emmy Nominations.   Finally, thanks to Hartford HealthCare, Medscape and Peter Knox for your endless vision and partnership in telling these stories.

It remains the highest honor to do this work.