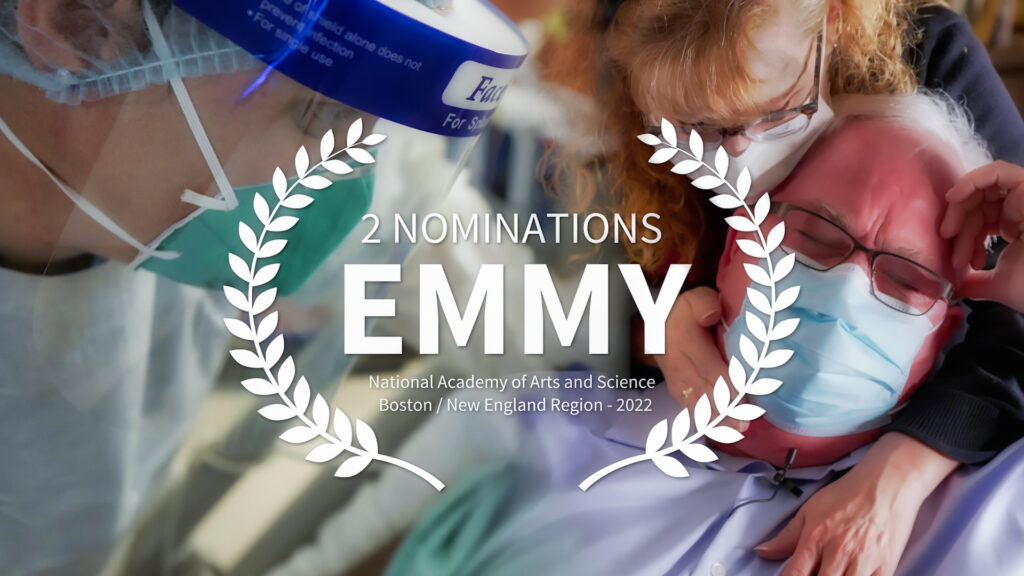 Envision Films / Jeff Teitler, in collaboration with Hartford HealthCare, Medscape, Rebecca Stewart, Nick Dethlefsen, Tina Verona and Eugenia Yun, are honored to announce two Emmy Nominations from the Boston/New England Region of the National Academy of Television Arts and Sciences, (NATAS).  The prestigious Nominations mark a new milestone within our production partnerships.  The 45th Boston/New England Emmy® Awards Ceremony will be held at the Wang Theatre on Saturday, June 4, 2022
EMMY Ⓡ NOMINATION FOR COVIDLAND
In COVIDLAND, critical care physician, Megan Panico and her ICU team selflessly care for on onslaught of COVID-19 patients.  Sacrificing their own health and family needs during the hight of the pandemic, COVIDLAND documents the mass of courage and hope during the greatest healthcare crisis of our time.

After 17 days clinging to life on a ventilator, hospital security guard, Jay Bialkowski’s recovery from COVID-19 was nothing short of miraculous.   It was also just the beginning of a brutal journey back to his life.

On behalf of all, we are extraordinarily thankful to the many practitioners and patients, who so courageously allowed their events, lives and care to be captured during such vulnerable times.     We would also like to thank the Academy’s Boston/New England Chapter for the prestigious Emmy nomination, Hartford HealthCare and Medscape for their vision, partnership and support.