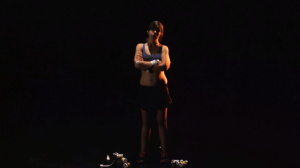 Recent graduate and CCSU Digital Filmmaking student, Kara Brewer has been fighting a rare genetic disease. She has endured a kidney transplant, brain surgery and many other complex issues related to BOR syndrome. She has also been filming her experiences with extreme courage and skill. Though the fight is ongoing and the battles are difficult, this week Kara received good news – She won First Place within Health Justice Connecticut’s Public Service Announcement Competition. Her entry, ILLNESS WILL FIND YOU was filled with intimate footage of her own disease. Kara is currently in production on her larger documentary – A film chronicling the triumphs and struggles of BOR Syndrome. The film includes cinematography by CCSU Graduate and Filmmaker, Joshua Therriault.