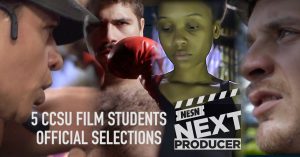 In an unprecedented outcome, the Film Emphasis within CCSU’s Department of Communication is pleased to announce that all five students, who submitted works have been OFFICIALLY SELECTED for NESN’s NEXT PRODUCER.  This semi final round includes a broadcast on the network, introductions to industry professionals such as Tom Werner and Brad Falchuk, as well as a chance to produce for the Red Sox and a job offer at the New England Sports Network.

All four CCSU student-films can be seen the NESN website by clicking the images below.   Season 3 of “NESN Next Producer” will begin airing on the NESN network Saturday, Feb. 17, at 8:30 p.m. ET.

THE ACT OF WOMEN

Best of luck to all participants.  Updates to follow.

« CCSU Film Student – An Official Selection In NYC» The Sweetest Land Selected to Screen in Miami, Austin and Saint Louis