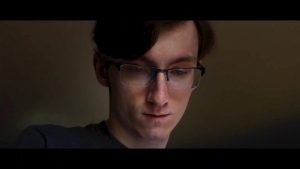 CCSU Film student and 2020 graduate, Tyler Helmbrecht is on the brink of success…This is his story.

TYLER:  In the early winter of 2019, I wanted to create a short film centering on my work at McDonald’s.  To be honest, I had never dedicated enough time to my filmmaking as sticking to one project was difficult.  While I always carried my camera, like most of us, I had strong mental blockades that I needed to break.   It was also challenging to not get discouraged throughout the process.   But don’t!

In my McDonald’s film, I wanted to highlight my experiences as an employee, which also included a McDonald’s scholarship for my CCSU education as a filmmaker.   On March 4th, 2020, I completed the first draft.  It was forty-eight seconds long, cheesy and simple.  Later, I had completed a second draft, which still needed work. 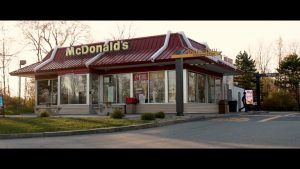 That’s when the battle began.   There were long pauses in between drafts, which were supported with deadline extensions and regular prods to continue from CCSU’s Film program.  But the more I filmed, the better my style, quality and message improved.   As I said before, the process was tough, but much of it was mental.
During my last semester at CCSU, Corona virus hit and classes were no longer live.  Feedback from CCSU’s Film program continued. Slowly, I plowed through…and then, after about 10 drafts,  it happened.  I finished. 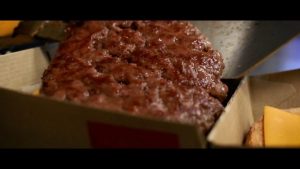 As I uploaded the final version on YouTube, I did not list it.  Instead, I sent a private link to my general manager at McDonalds, who sent it to her manager.  Six hours later the franchise owner called my personal cell phone while I was closing the store.  Within 24 hours, so many people had shared the private link, that it had over 500 views.   So, I made it public.  In doing so, I’ve connected with industry professionals on LinkedIn and even exchanged emails with
the Senior Vice President of corporate McDonald’s –  other higher ups as well.  Because of this film, corporate McDonald’s connected me with their primary advertising firm and today, I am on my second interview for employment at that firm.
Posted by Jeff Teitler – Professor of Communication
Production and Performance Studies
Central Connecticut State University